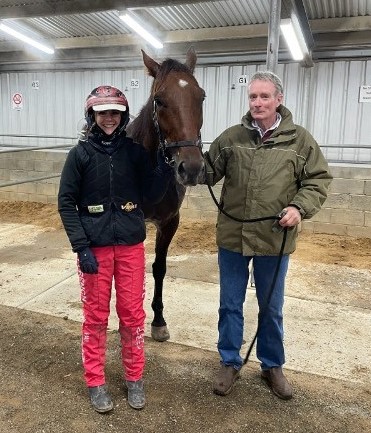 Echuca was the venue for the latest VHRC Bonus meeting held on Tuesday May 31 with a strong program featuring the $10,000 George Croxford Tribute for Three Year Olds over 2160 metres, but unfortunately for connections wasn’t registered for the bonus scheme, however many owners were as listed below.

You can enjoy these benefits by joining the club as many have and if you have not done so as yet and would like to take advantage of the offers, give Kelly Ternouth a call (0408 570197) or e-mail contact@vhrc.org.au

Ever reliable 9Y0 Tennotrump-Della Spark mare Mystic Chip raced by Glenn and Christine Sharp was victorious in the VHRC / Aldebaran Park Trotters Handicap over 2130 metres. Trained by Glenn at Longlea, Mystic Chip showed no signs of disturbance after falling prior to the start and stepped cleanly from barrier three for regular reinsperson Monique Burnett to trail fast beginner Dream Over (barrier two) which led easily. Enjoying the run of the race, Mystic Chip used the sprint lane to score by a head over Dream Over, with polemarker Bellmac Bambi a stablemate of the winner (three back the markers – three wide home turn) third 2.8 metres back. It was Mystic Chip’s 13th success at start number 160, returning a mile rate of 2-08.1.

It was a great race for Glenn as he was also eligible for the trainers bonus.

A host of owners Brian & Ian Ransome, Sue Tippet, Graeme Johnston, Adam Robertson & Clint Beecroft shared the major prize in the VHRC Trainer Memberships Available Until June 30th Pace when their 7Y0 Four Starzzz Shark-Gabrielle Bromac gelding Aimforthestarzzz scored in a mile rate of 2-03.1. Trained and driven by Melton’s Ken Tippet, Aimforthestarzz led from the pole and never looked like being beaten, greeting the judge 4.6 metres in advance of Rockin In Memphis (three wide from outside the front line to be outside the winner – one/one – three wide home turn), with Ona Safari (three wide last lap from the tail) third 5.8 metres away.

Ken Tippet was another to receive the trainers bonus.

Tasmanian trainer Ben Yole chalked up a double at the meeting – 6Y0 Auckland Reactor-New Mythology mare Coveffe Hustler (Robert Walters) leading throughout from the pole to land the APG – Bringing The Sales And Races To Owners Pace over 1755 metres and 10Y0 Bettors Delight-Holme Safely gelding Border Cross (Mark Pitt) the APG Offers $2.2M In Prizemoney Pace over the same trip. Coveffe Hustler raced by Ben Yole Racing Pty Ltd travelled kindly, but only just lasted by a head from Shawami Lass (gate two- one/one, one/two - three wide last lap to join the leader on the final bend). Rocks Can Roll which trailed the winner from inside the second line was third a half neck back after using the sprint lane. The mile rate 2-01.7. Border Cross raced by Solotrek & Ben Yole Racing Pty Ltd enjoyed a sweet passage from inside the second line following poleline stablemate Machavelli before gaining a freak inside passage prior to the home turn and dashing away to register a 22.2 metre margin over Machavelli and Reckon Im Smart which trailed the pair finishing 5.7 metres back. The rate 2-00.8.

It was a terrific night for Ben who received the trainers bonus for both races.

Four year old Art Major-Odds And Ends mare Mosiac Art a prohibitive $112 favourite trained by Emma Stewart and driven by Mark Pitt for Aaron Bain Racing Pty Ltd, Summit Bloodstock Syndicate, Aidan Sweeney and P Guthrie outstayed her rivals from outside the front line to land the 1755 metre APG – Serving The Industry For 32 Years Pace. Trapped in the open outside Animado (gate four), Mosiac Art looked a spent force running into the final bend when hard at it as the leader kicked away. Rallying under hard driving in the straight, Mosiac Art found her second wind to gain the day by a neck in a rate of 1-58.8 over Animado and Ace Montana which used the sprint lane from three back the markers to finish third 9.7 metres back.

Emma Stewart was another to receive the trainers Bonus.

The VHRC Horse Memberships Available Until 30th June Pace over 2160 metres went the way of ex-Kiwi 4Y0 Bettors Delight-Loyal Arden gelding Mr Perfect. Trained by Russell Jack at Lemnos and driven by son Nathan, Mr Perfect raced by a large syndication consisting of William Lewis, Stephen Hunt, Jess Verdichizzi, Dawn Leppard, Greg Peart, Shirley Hargreaves, Adam Rudd, Robert Purcell and Wes Trotter having his first start on Australian soil settled one/one before letting loose to cross the leader Muscle Up Major (gate two) shortly after the start. When the favourite Blitzern went forward off a three wide trail from a solo second line draw to race exposed, the pair had the race to themselves with Nathan rating the winner to perfection. Kicking clear on the final bend, Mr Perfect first up since April scored by 5.3 metres from Blitzern who was not disgraced, with Mauries Bonus using inside runs from four back the markers for third albeit 16.2 metres back. The mile rate a slick 1-56.6.

Ultra consistent 7Y0 Artistic Fella-Millenium Outbreak gelding Pirates Of Zanzibar bred and raced by Barham’s John Morris, trained by neighbour Dennis Stevens and driven by Bendigo’s Tayla French notched up his 13th success at start number 92 when taking the Join The VHRC ‘The  Heart Of Harness Racing’ Pace over 2160 metres. Safely retaining the inside running from the pole, Pirates Of Zanzibar was allowed to dictate terms to a nicety and couldn’t be caught, scoring by a half neck from the well supported Herehecomes which used the sprint lane after trailing from a solo second line draw. Roslyn Gaye was third 9 metres back after following the pair. The mile rate 2-02.1.