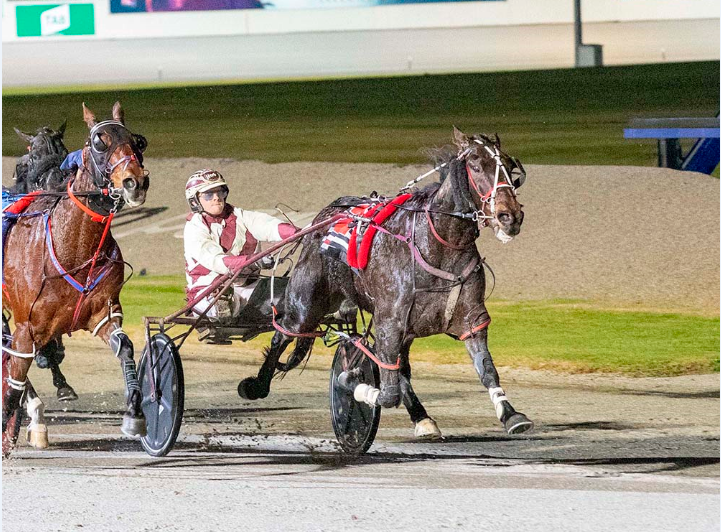 Melbourne’s harness headquarters Tabcorp Park Melton played host to the VHRC bonus scheme races on Friday July 2 and a special thanks to all of our members who supported the meeting. Congratulations are extended to the owners and trainers who reaped the benefits.

Strathfieldsaye trainer Julie Douglas combined with husband Glenn aboard 8Y0 Village Carload to capture the Join The VHRC The Heart Of Harness Racing Claiming Pace over 1720 metres. Raced by Steve Warren, Carload backed for bundles was taken back from gate six to settle five back in the moving line as polemarker The Defiant the rank outsider led from the pole. In what was the “drive of the night” Douglas weaved in-between runners to follow the then leader Explicit Castle into the final bend and after using the sprint lane to perfection, prevailed by 3.4 metres over Explicit Castle, with Ample Power (three wide last lap) from the rear third 10 metres back. The mile rate 1-54.7. Julie also received the VHRC Trainers Bonus.

The TAB Long May We Play 3Y0 Trotters Mobile went to the Brent Lilley (Bolinda) trained Muscle Mass-Nice One Kenny gelding Here Comes Kyvalley in a mile rate of 2-03.3. Given the run of the race from gate two by Ross Payne trailing the leader Free Star (gate three), Here Comes Kyvalley using the sprint lane greeted the judge by a neck, with Euryphaessa (one/one at bell) – three wide last lap third 11.3 metres away after making more than one move during the race. Brent Lilley received the VHRC Trainers Bonus.

Five year old Art Major-Mesmerizing gelding Messerati trained by Maree Caldow and raced by a large group of owners (M Caldow, J Kelly, M Caldow, L Caldow, M Retallick, P Caldow, M McLean, P Kay, C Smith and T Nihill) chalked up his 10th success by taking the Become A VHRC Member Today Pace over 2240 metres. Bred by Maree, Matthew & Lauren Caldow along with John Kelly, Messerati driven by John Caldow settled four back in the moving line from gate two on the second line after polemarker Major Mal retained the front running. When Revitalise ahead of him commenced a forward three wide move in the last lap, Messerati immediately latched to his back for a great ride home. Finishing determinedly, Messerati outgunned Revitalise over the concluding stages to score by 2.2 metres in a mile rate of 1-58.2. Supreme Dominator (three wide last lap from the tail) was third a nose away.

The owners would have been thrilled to receive the VHRC Bonus along with Maree who also collected the Trainers Bonus.

Four year old Art Major-Ymbro Wicked mare Punt For Pleasure was victorious in the Don’t Miss Out On The VHRC Bonusus Pace over 2240 metres. Trained and driven by Lancfield’s “Rocket” Rod Petroff, Punt For Pleasure enjoyed a cosy trip three back along the markers from inside the second line trailing both Junior Feelgood (gate three) and polemarker Elleker Hanover. When Elleker Hanover shifted away from the inside on turning, Punt For Pleasure took advantage of the sprint lane and finished best to gain the day by a head from the leader, with Elleker Hanover third 6.2 metres back. The mile rate 2-00.1.

Rod Petroff has been one of the state’s most in demand reinsmen for a number of seasons after making the move from Queensland a number of years back. The victory gave him the Trainers Bonus making it a profitable race.

Andy Gath’s 4Y0 Kiwi imported gelding Zigzagzoo (Majestic Son-Letz Hope) was an easy winner of The VHRC Website www.vhrc.org.au Trotters Mobile over 1720 metres giving Andy the much sought after trainers bonus. Driven by wife Kate, Zigzagzoo  led all of the way from gate five, running out a 2.3 metre victor over Full Noise along the sprint lane from three back the markers. Honest mare Leanne Leeann was a game third a half head away after racing exposed. The mile rate 1-58.9. Prolific owner Norm Jenkin a Queensland developer who received the VHRC Owners Bonus has enjoyed great success with Andy and Kate. Andy was also the recipient of the Trainers Bonus.

Julie and Glenn Douglas provided a stable double when Western Terror-Virtuosy filly Pray Tell raced by Catherine Egan was a big winner of the 2200 metre APG – Not For Profit Sales Co 3Y0 Pace in a mile rate of 1-58.4. Starting from the extreme draw, Pray Tell made a lightning move three wide racing for the bell to lead for the final circuit in defeating Captain Wilson (one/two) which joined her on the final bend by 3.6 metres. NSW visitor Miss Hattie (three back the markers last lap – one/one on turning) was third 2 metres away. Catherine would have been elated after receiving the VHRC owner bonus, while Julie snared her second Trainers Bonus for the night.

Astute Sunbury based trainer Tim Butt who has won numerous premier races throughout his homeland New Zealand and Australia including New Zealand and A.G. Hunter Cups and an Inter Dominion Trotting Final  was the recipient of the Trainers Bonus following the victory of 4Y0 Kiwi bred gelding Calf Pen in the APG Bringing The Sales & Races To Owners Pace over 2240 metres. A 4Y0 gelded son of Hes Watching and Jaz Tanner, Calf Pen was driven a treat by nineteen year old son Riley who gave the horse every opportunity trailing the leader Our Master George (gate three). Using the sprint lane, Calf Pen registered a 1.9 metre margin in advance of a game Our Classie Reactor which raced exposed, with Blazin Cracker (one/one) third 3.5 metres back. The mile rate 1-57.1.

Six year old Village Jasper-Regulatory Affair gelding The Regulator was successful in the APG Serving The Industry 32 Years Vicbred Maiden Pace over 1720 metres for Gordon father and son Tim and Darby McGuigan. Enjoying a sweet passage from the pole trailing the hot favourite Beau Steele which flew away from gate five to lead, The Regulator used the sprint lane to perfection to gain the day by 2.9 metres in 1-59.7 from Beau Steele which gave nothing. Lady Olivias Folly (one/one – three wide home turn) was third a half neck back. Even though the horse wasn’t registered for the Owners Bonus, Tim received the Trainers Bonus adding elation to the victory.

Tim based at Gordon not far from Ballarat has been involved in the sport for many years usually with bread and butter type horses, the best being Moreliner, Byalla Boy and Rebeccas Art with most being driven by Darby.