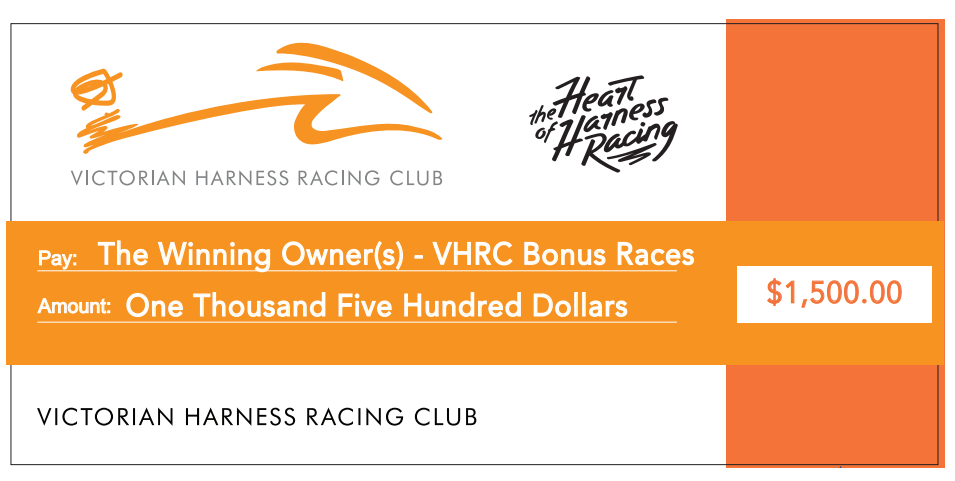 Shepparton hosted the VHRC Bonus Meeting held on Sunday October 10 and again many members received their $1500 bonus during the afternoon with delight after their horse was successful.

Although not registered for the owner bonus, home bred Artspeak-Wholelota Rosie filly Australiana gave Bendigo based trainer Alex Ashwood the trainers bonus when successful in the Be A Part Of APG’s Greatest Ever Sales & Race Series 3Y0 Maiden Pace. Raced by Lisa Justice who bred him and Shane Murphy, Australiana driven by Alex (gate two) angled from four back the markers to possie one/one as pole marker Mon Belange easily held the front running. Easing three wide on the home turn, Australiana dashed away shortly after to register a 11.5 metre victory from Regality (four wide home turn) from near last, with Mon Belange holding down third a neck away. The mile rate 2-02.7.

Alex received his second trainers bonus for the afternoon when the Yabby Dam Farms Pty Ltd bred and owned 4Y0 Quaker Jet-Donegal Flat mare La Serena led for the majority of the journey from gate six with partner Tayla French in the sulky to land the VHRC / Aldebaran Park Benefiting Our Members Trotters Mobile over 2190 metres. Travelling kindly, La Serena coasted to the wire 25.3 metres in advance of a death-seating Dash Of Flair which was so courageous, with Partytime (one/one) third a half head away. The mile rate 2-02. La Serena was not registered for the owner bonus.

The APG – 2Y0 Finals Each Worth $750m In Prizemoney & Bonuses Pace over 2190 metres went to 5Y0 Well Said-Johnola Babe gelding Well Said in a mile rate of 2-00.7. Trained at Wahring by Rosie Weidenbach, for husband Paul and a number of stable clients, Well Well driven by daughter Olivia enjoyed a sweet one/one passage from outside the front line before moving outside the leader Rambunctious on the final bend. Taking over in the straight, Well Well just lasted by a nose from the fast finishing Illawong Jovial from the tail. Rocks Can Roll (one/three – four wide last lap) was third 1.1 metres back after switching down to the sprint lane.

Maude owner/trainer John Kendall would have been elated after received all the spoils (owner/trainer) when Art Major-Miss Mach Kana colt Ooga Chaka racing under the banner of Kenlach Standardbreds led throughout from gate five to land the 1690 metre Check Out The VHRC Website www.vhrc.org.au 2Y0 Maiden Pace. Driven a dashing race by Rod Lakey, Ooga Chaka named from the Blue Swede hit “Hooked On A Feeling” held a handy lead throughout and showing no signs of weakening, greeted the judge 5.1 metres in advance of Lochinvar Charm (three back the markers) and Sonic Express (four back) who was 1.2 metres away. The mile rate 1-55.9.

Goulburn Valley (Undera) part-owner/trainer Glenn Freeman’s 5Y0 Bettors Delight-Girl Of The Moment gelding Lets Dig It was a big victor of the Don’t Miss Out On The VHRC Bonuses Pace over 1690 metres. Driven by Daryl Douglas, Lets Dig It led throughout from the pole, kicking clear approaching the home turn to record a 1.4 metre margin over a game Lombo Idle Belief which raced outside him. Goodlookin Rooster gained a split through the centre from the tail to be third a head away. The mile rate 1-58.3.

The APG – Industry Owned & Not For Profit Pace over 1690 metres saw Shelbourne trainer Kate Hargreaves victorious with Kiwi bred Changeover-VC’S Honour mare Honour Before Glory raced by Brad & Emily McMullan and Glenn Backhouse. Driven by stable reinsman Jack McKinnon, Honour Before Glory starting from gate two on the second line settled three back in the moving line as noted front runner Artizz led from gate two. Easing three wide in the last lap to join the pacemaker on the home turn, Honour Befory Glory was too tough at the business end, scoring by 8 metres from Hayjoshandco along the sprint lane from three back the markers and Just A Philtra which trailed the weakening leader easing wide in the straight which dead-heated for second place. The rate 1-56.6.

Three year old Rock N Roll Heaven-Close Embrace gelding One Big Shew who commenced his career in NSW snared the 1690 metre Become A VHRC Member Today Pace much to delight of WA based owner/breeders Peter Hayes, Murray James and David Maffey who received the owner bonus. Trained by David Aiken and driven by son Josh, One Big Shew led from the pole and was never headed. With Apieceoflou making a fast move from the tail in the last lap to join the winner on the home turn, One Big Shew kept on giving all the way up the running to just last by a head in 1-56.7. Wow You Can Dance which trailed the winner was third 3.6 metres away.

It is interesting to note that the pronunciation of the horse is actually One Big “Show” with Shew being the archaic medieval spelling of the word.

The group have raced many horses, this one being the first in the Aiken stable.

The APG – Home Of Australasia’s Richest 2Y0 Trotting Race Pace over 2190 metres was taken out by Byrneside trainer/driver Laura Crossland’s smart Artspeak-Keep Watching Me 3Y0 colt Codys Colt raced by a large group of owners headed by Shaun Kelly. Given a lovely trip one/one from gate five, Codys Colt sprinted swiftly in the back straight on the last occasion to lead on the home turn with the race safely in his keeping, reaching the wire 5.2 metres clear of a game Prosecco Boy (gate four) which raced in the open throughout. Atreacherous (four back the markers) ran on well along the sprint lane for a head third. The mile rate 1-57.1.

Kialla co-trainers Stephen O’Donoghue and Bec Bartly scored an upset in the 2190 metre Alabar / VHRC Vicbred Platinum Maiden Pace when Jacksboy bred and raced by Queensland based John Eichhorn was successful at odds of $21.60 and in doing so, gave the pair the trainers bonus. A 5Y0 gelded son of Art Major and Bridge Player driven by Bec, Jacksboy starting outside the front line showed plenty of speed to go forward and lead and allowed to bowl along, defied all challengers to register a half neck margin over first starter Blackbird Miss which raced uncovered from gate two in a 2-00.5 mile rate. Harts Last (one/two last lap) was third 19 metres away.

John Eichhorn has raced many handy horses with the best being San Carlo who is on schedule to contest his fourth Inter Dominion Series next month.