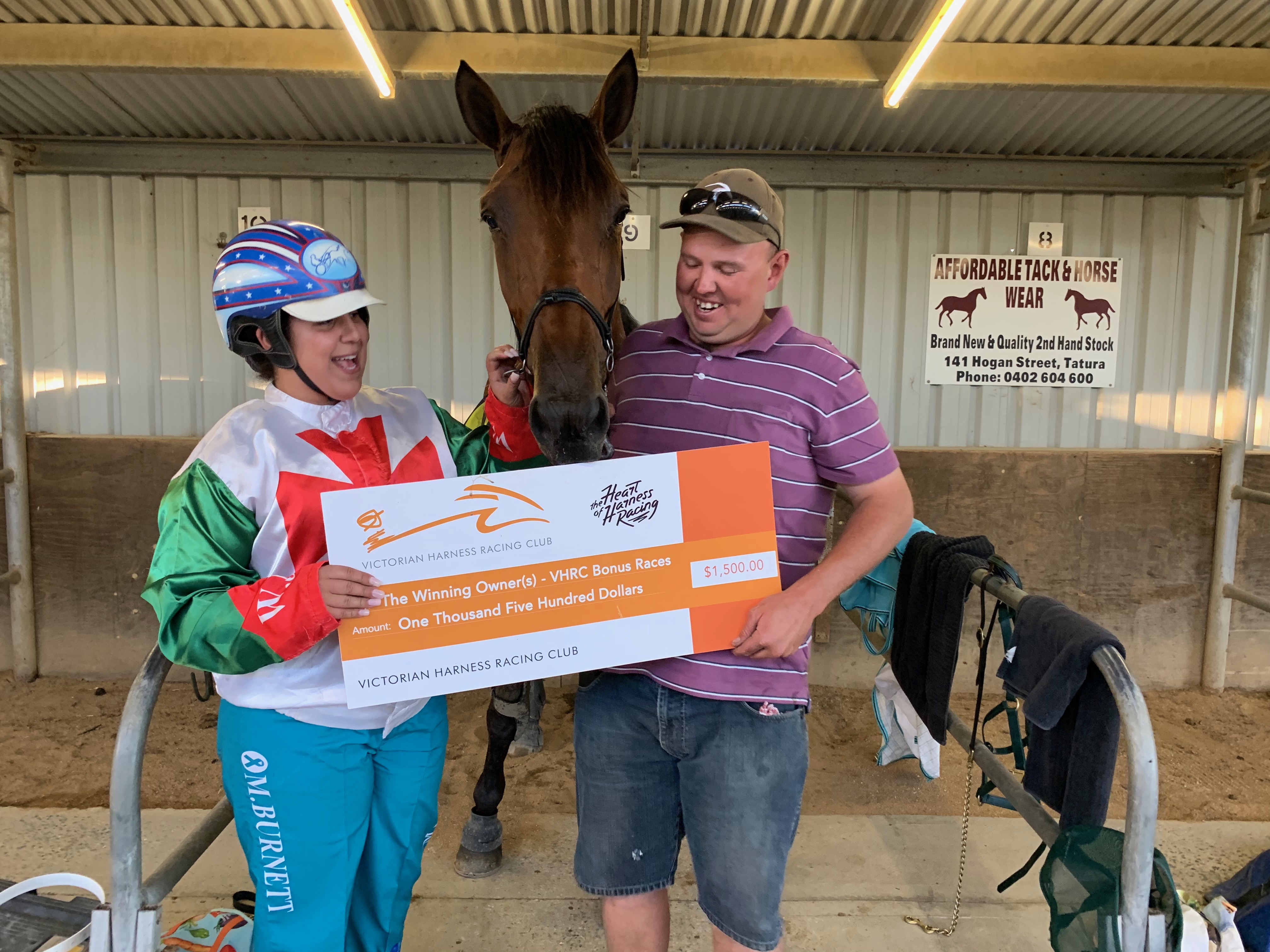 The response has been outstanding of late with a plethora of participants joining the scheme.

It was a thrilling finish to the VHRC – APG Bonus Race Series Pace over 1755 metres taken out by 7Y0 Christian Cullen-Pk Bunny entire Goodlookin Rooster in a mile rate of 1-58.4 much to the delight of the Weidenbach family and partners.

Raced by Paul Weidenbach and co-owners Bernie O’Kane, Bluey Thorn and wife Anne, Goodlookin Rooster trained at Wahring by Rosie Weidenbach with Paul assisting, was driven by daughter Olivia and raced uncovered from gate four all of the way, fighting on like a bulldog to prevail by a nose from Lagom which trailed the weakening leader Renway Reactor using the sprint lane, with Courts Bliss flying home late along the sprint lane for third a nose back. Renway Reactor a nose away fourth.

Trained by Brian, Starlight Red driven by Laura Crossland began very fast from outside the front line to lead and after being allowed to run along, defied all challengers to record a 7.6 metre victory over Romances (four back the markers – three wide last lap). Kilarney Heidi was third 2.6 metres away after racing exposed from the bell. The mile rate 2-03.6.

Kilmore mother and son Julie and Willie Mifsud’s 8Y0 Yankee Paco-Zhari Belle gelding Daquiri chalked up his 12th success in 78 outings after greeting the judge in the Become A Member Today Trotters Handicap over 2130 metres.

Driven by Monique Burnett for Kilmore trainer Thomas Parnell, Daquiri after beginning smoothly from a 30 metre equal backmark was soon racing in the coveted one/one spot after avoiding a few breakers at the start, with Whos Countn leading from barrier two. Easing three wide prior to the home turn, Daquiri  loomed outside Whos Countn on the final bend, proving a little too strong over the concluding stages to win by 1.9 metres in 2-03.9. Bacardi Wood (one/two) was third 8.9 metres away.

Raced by the pair, Polly Peachum occupied her favourite spot of leading from the pole and although heavily pressed on turning, fought on bravely to score by a nose from a death-seating Village Encounter in a mile rate of 2-01. Tearsonmypillow trailed the winner from gate two when third 2.5 metres away after using the sprint lane.

Bred and raced by Tongala’s McGill family, Time To React starting from gate two on the second line settled mid-field in the moving line as Roslyn Gaye flew out from gate five to lead before surrendering to Costly Mistake at the bell which had been outsider her. Going forward three wide in the final circuit with a great burst of speed, Time To React led on the home turn, running out a 4.7 metre victor over Hard Rock Shannon which followed her throughout, with Coolhand Easton (four wide home turn) third 1.9 metres away after trailing the pair. The mile rate 1-59.8.

He enjoyed a great season last year and has continued in doing so this season. He has prepared 34 winners to date.

Brent is assisted by wife Debbie and family on a daily basis.

Trained in partnership by Anthony Butt and Sonya Smith, Turquoise Stride worked past poleliner Goodmorning Cheryl shortly after the start and given an easy time, safely held his rivals to score by a metre from Danceforme (one/one – three wide home turn) and Goodmorning Cheryl who was 4.3 metres away after using the sprint lane. The victory gave Olivia Weidenbach a double for the night.

The same could be said for wife Sonya Smith who worked for Tim Butt at one stage and was given the job of looking after handy trotter Realmein when campaigning in Victoria a few years back.

A 6Y0 Maffioso-Sass And Bling gelding, Sasscilian driven by husband Doc Wilson led throughout, accounting for Celebrita (one/two – three wide to outside the winner for the last lap), with Lethal Lover third after following the runner up home.  The margins a neck by 2.2 metres in a mile rate of 2-03.