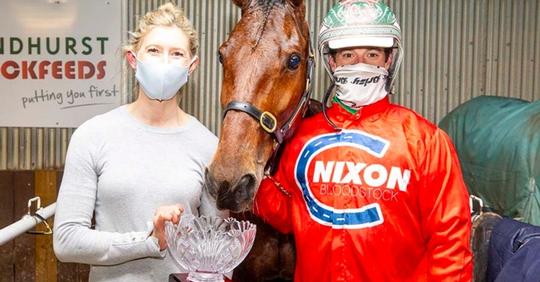 Due to the continuing covid lockdown conditions including the State Government enforced curfew, a tremendous metropolitan class meeting was held at Lord’s Raceway Bendigo on Saturday September 11 featuring some outstanding racing.

The $100,000 (Group 1) Victorian Harness Racing Club Caduceus Classic over 1650 metres was the main feature and what a race it was – the victor being ex-Kiwi 6Y0 American Ideal-Slangevar gelding Triple Eight trained at Myrniong by Jess Tubbs assisted by husband Greg Sugars who drove the horse.

Favourite General Dodge first up since May exploded away from gate five to lead for Jason Lee from Max Delight (gate two) which was allowed to cross shortly after the start which relegated highly fancied polemarker Western Sonador to three back the markers. Triple Eight after being restrained from gate four angled to be three back in the moving line being trailed by Out To Play which started from gate two on the second line after Wolf Stride went forward from outside the front line to shadow the pacemaker giving Boots Electric one/one cover.

Going forward three wide approaching the final bend, Triple Eight raced up to the leaders as General Dodge utilized the sprint lane on turning with Out To Play easing four wide to challenge after following Triple Play forward. Gaining the upper hand as the winning post loomed, Triple Eight registered a most impressive 4.1 metre victory (last half 54.7 – quarter 27.3) from General Dodge, with Out To Play a head away third. Raced by a group headed by Shannon Nixon, NZ breeder Scott Plant, Joel Watson, Shane Cook and the “Pacing Priest” Father Brian Glasheen, Triple Eight recorded a sizzling mile rate of 1-51.7.

The other highlight on the program was the time honored standing start $50,000 (Group 1) Opus Group Australasian Trotting Championship over the staying trip of 2650 metres taken out by in-form Lawman-Sundonna gelding Maori Law much to the delight of owner/breeder Fred Crews, a long time VHRC member.

Driven by Anthony Butt for Meredith co-trainers Emmett and Richard Brogden, Maori Law stepped safely from the pole, with Robbie Royale drawn next door beginning equally as well to cross him. The re-take was made shortly after with Maori Law coming away from the markers to assume control on the first turn.

Four year old entire Cover Of Darkness thrown into the deep end stepped cleanly from outside the front line for David Moran lobbing one/one momentarily and challenged Maori Law for the lead, taking over entering the straight on the first occasion. This left the Anton Golino trained second line pair Imsettogo in the open and Im Ready Jet following, with Majestuoso trailing the pair after coming from 10 metres. The stablemates were to swap positions mid-race with Im Ready Jet applying plenty of pressure to the leader prior to the home turn and Majestuoso joining in three wide.

With Majestuoso being hailed the winner halfway up the running, Im Ready Jet refused to give in and was fighting on doggedly with both horses going head and head to the wire.

This is when Maori Jet after being inconvenienced on the home turn as the leader gave ground, switching down inside him to the sprint lane and rattled home at 100 miles an hour to blouse the pair by a half head from Im Ready Jet, with Majestuoso a head away third in a thrilling finish. Robbie Royale held his ground to finish fourth 5.3 metres from the winner. In sections of 31.9, 31.8, 29 and 28.3 for the last mile, Maori Law returned a mile rate of 2-02.3.